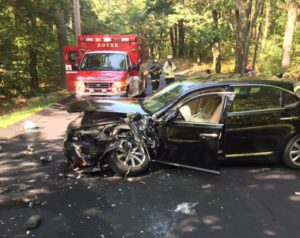 DOVER, MA – On Monday September 11, 2017, at approximately 2:27pm, the Dover Police responded to a report of a motor vehicle crash with injury involving a car and a truck on Walpole Street near Cedar Hill Road. Officers Vonhandorf and Grabert arrived to find a sedan driven by a 68 year old Dover man had collided with a box truck. The occupants of the box truck were uninjured. The driver of the sedan was treated on scene by Dover EMS and Westwood paramedics before being transferred by ambulance to Boston MedFlight Medevac helicopter and transported  to Brigham and Women’s hospital in Boston.

Preliminary investigation shows that the sedan was traveling west on Walpole Street and struck the box truck in the oncoming lane. Detours were in place for approximately 40 minutes while first responders worked the scene.